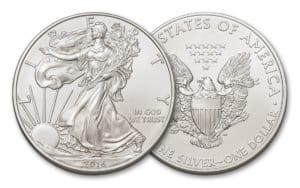 Since its discovery around 4000 BCE, silver has been coveted by people both as an exchange medium and for making luxury items. The first U.S. silver dollar coins were minted in 1792. In 1986, the U.S. Mint released the first American Eagle, a silver bullion coin with a design based on A.A. Weinman’s “Walking Liberty,” originally introduced on the half-dollar in 1917. Collectors and investors alike appreciate the beauty and value of these coins, and according to the U.S. Mint, over 30 million American Eagle Silver bullion coins were sold in 2012, with similar sales for preceding years. However, as with any investment, despite their popularity and value, it is wise to consider these eight points before purchasing these precious coins.

1. The Official Silver Bullion Coins of the United States

The American Eagle Silver Bullion coin is authorized by Title II of the Liberty Coin Act of 1985, which mandates that it has a nominal face value of $1 and contains one troy ounce of 99.9 percent pure silver. The coins are the only silver bullion coins in existence whose weight, content, and purity are guaranteed by the U.S. Government and certified by the U.S. Mint.

Due to the strict regulations regarding their printing, American Eagles are easily identified. Every American Eagle Silver Bullion coin is minted according the specifications listed in the chart below.

These specifications make it easy for buyers and sellers to identify American Eagle coins. Furthermore, the details of the design can be compared against other types of silver bullion and collectible coins.

2. Their Value Is Largely Symbolic

American Eagle Silver Bullion coins are considered legal tender and have a face value of $1. This value is largely symbolic; however, as they are traded based on the market rate for silver, plus a small premium. Their actual silver market value is much higher than their $1 face value.

The U.S. Mint produces three versions of the American Eagle Silver coins. There is a proof version and an uncirculated collector ‘ s version as well as the bullion version. The bullion version is only distributed to the public through a network known as Authorized Purchasers to include wholesalers, brokerage firms, precious metal and coin dealers, and some banks. The U.S. Mint only sells the proof and collector’s versions directly to the public.

4. The Only Silver Coins Allowed in an IRA

American Eagle Silver Bullion coins are considered investment-grade silver bullion coins and are the only official investment-grade silver coins in the United States. As such, these coins can be used to fund Individual Retirement Accounts (IRAs). Major investment markets around the globe also accept them. Additionally, the Internal Revenue Service (IRS) exempts the American Eagle Silver Bullion coins from IRS 1099 reporting, which provides the investors with an added level of privacy.

5. American Eagle Coins Are Easy to Buy and Sell

One measure of a good investment is its liquidity. American Eagle Silver Bullion coins are easily bought and sold through any Authorized Purchaser. Their distinct design, with the eagle and shield, reeded edges, and brilliant luster, along with their U.S. Government backing and clear mark of fineness, makes them easily identifiable and highly tradable.

6. Bullion Coins Are Not the Same as Collectible Coins

Bullion coins differ from collectible coins in a few ways. The resale value of collectible coins is determined in large part by the numismatic value of the particular coin as opposed to the actual value of the silver content in the coin. The value is dependent upon what a dealer is willing to pay for it, and therefore, is subject to wide fluctuations. Bullion coins have a resale value based on the actual precious metal content in the coin. The physical price of silver, plus a small premium, determines the value of a bullion coin.

American Eagle Silver coins are the finest silver coins issued by the United States Mint. Made of one full ounce of troy silver, with a small amount of copper added for durability, these desirable and valuable coins are purchased by investors all over the world. As legal tender, the face value is only $1, but their actual value is much higher. Silver is the most affordable precious metal, making silver bullion an affordable investment for any investor. The price of silver rarely declines, which means there is a low risk of investing in American Eagles. Despite their relative safety as an investment, buyers should consider the points outlined above in order to make an informed, intelligent purchase.

Please check that this widget Google Reviews has a Google Place ID set.